Life offers us many simple pleasures. Some are classically considered, like the sound of rain on the roof or a well-brewed cup of tea, but others are a little more unique to the digital age, like being able to trek into the wild country of random movies. Though not every movie is worth writing home about (or finishing), there can be some unexpected treasures.

It’s been a while since I’ve seen a movie that really stirred my imagination—not just something whimsical, but something that pulls on your sleeve and asks you to stop and think about it for more than a few minutes. More common are the ones that unwind for a few dragging minutes before you turn to your companion and realize that they were, at that very moment, about to turn to you and ask if there’s something, anything else to watch. While those are better than the ones that send you scrambling, falling off the couch to find the remote to turn it off, they’re still quite a disappointment. So my hopes were not high when I started watching Patema Inverted directed by Yasuhiro Yoshiura. My sister and I had tried one Japanese animation movie first that evening with no success (it was the third installment of a story that was a video game and then a short television series first—no way to have known). I had seen a preview for Patema Inverted a few weeks before, and when we saw it on the shelf at our local movie rental store, we figured we’d give it a shot.

I expected it to be bizarre, but this isn’t typically a drawback for me. The story centers on two main characters from very different worlds. Patema is a girl who lives in an urban maze of subterranean buildings and tunnels, relics of an old world. She and a few other brave explorers suit up in heavy gear each day to search the ruins in hopes of finding food and other supplies for their community. Age, a boy who lives on the surface, spends his days in colorless classrooms where the students are taught to be orderly, to not ask questions, and to not look at the sky. A catastrophe caused by what would have been an enormous scientific breakthrough shifted the world’s gravity, causing half of the people, houses, and everything else to fall into the sky. These people, deemed “sinners” by those left behind, were abandoned to their fate.

Though he has been taught to never look up, Age is doing just that when Patema tumbles down a deep chasm and saves herself from falling into the great abyss of the sky by grabbing on to a fence. Age saves her by pulling her down and holding on. Not only are their worlds separated by culture and location, but by opposite gravities as well. While Age is what we would consider upright, Patema is upside-down. While Patema and Age navigate his world together and avoid those who want to destroy her, they start to define the vague shapes of history and discover the truth of what really happened that split their world so radically. 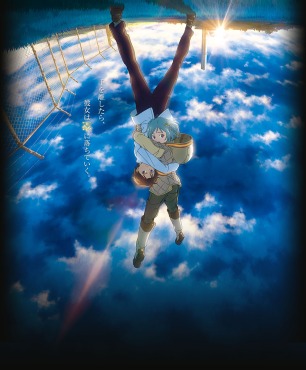 Stylistically, the movie is lovely. Sweeping panoramas of starry skies and cloud-brushed afternoons are commonplace, and the ways that the film explores what the world would look like upside down are clever and sometimes mind-boggling. One of the most charming moments shows Patema peering down from the top of a doorway into the sky swirling below her. The story takes the concept of perspective and creates a narrative that is fundamentally based on it. It visibly changes how a person sees the world and offers a relationship where the boy must literally choose to not let go of the girl. While the premise seems simple—everything looks different from someone else’s perspective—the movie is anything but simple. Each character’s understanding of the world and their personal motivations are linked to how they see the world, and when they meet someone who sees it differently, then they must make some decisions about what they believe is true. I won’t give away the twists, but I will say that after the end credits started to roll, I had to pull out a piece of paper to do a bit of diagramming. Even the audience’s “perspective” is challenged by the ending.

Patema Inverted is a beautifully produced animated film, and it utilizes the medium to create a story that is thoughtful and quietly profound without losing a sense of lightness. When I first heard the concept, I did wonder, How can they really do a whole movie with the main characters flipped like that? It must have certainly been a challenge for the writers, but it created an intriguing bit of storytelling and artistic arrangements.

If you’re like me and willing to give a random movie a try, do try this one. I found it to be a treasure. If nothing else, it reminded me that there are still good stories being told everywhere!