I wonder what Montana is like, I thought when I heard that I would be going there on a family trip. I’d been to Montana before, but only in the sense that I had been to a tiny airport there that only opened when a plane landed and closed when the plane took off again. Shortly after learning that we’d be going to Montana, I learned that we’d be popping over to Idaho, too. So that led me to wonder what Idaho was like. I could recognize the shape on a map, remember the name of the capital, recall that so many potatoes are grown there, but what it looked like? I didn’t know. So the trip was destined to be a sight-seeing trip, and I had no idea what kind of sights I’d see.

Usually, vacations, especially ones where you might be considering spending time on and in lakes, don’t happen in late August and early September. Our timing was unusual, but it’s no bad thing to see a place in a different time of year. It was a grand gathering. My dad, sister, and I made the first short leg of the trip together, picking up my brother and his wife soon after. After driving late into the night, rising early, and driving until afternoon, we arrived at an airport in Montana to pick up the last member of our group, my granddad. From there, we went to the Lake.

It’s worth capitalizing. I had heard about this lake for several years as my brother and sister-in-law would look forward to it before they went and fondly reminisce about it when they came back. For both of them, it is a place that is instant peace, wonderful detachment from the outside world, a deep breath of free air. My brother once told me that when he needs to focus on a task or collect some calm, he thinks of this place. Just the word “lake” will put him there, and he finds himself. It sounded like a lovely place, and I couldn’t wait to see it.

That evening, my sister-in-law showed me how to paddleboard. Feet planted on the board, I rowed out into the glassy water and stood, oar in hand, in what felt like the center of a fading world. The haze blended the point where the water and the sky divide, and so it seemed that there was no difference between the two at that moment. Even as I write the memory, I feel like pieces are already slipping away, despite telling myself then to remember it all, to take it all in, you’ll never see anything like this again.

This was taken by my sister-in-law, whose photography skills are amazing.

When the sun finally did reach the horizon, it cast the world in the deepest oranges and reds and the water seemed to melt. Amazing to think that a sunset that gorgeous was only possible because of the wildfires.

The smoke began clearing the next day as firefighters and rain did their best to keep the flames back. Every day, the lake appeared in a new way. To be more accurate, I should say that it appeared in a new way every hour. At one time, it would be smooth and clear, blue and bright like the sky above it. Later, it would be rippling and green. Minutes later, it might be choppy and restless, the water so blue that it was nearly black. 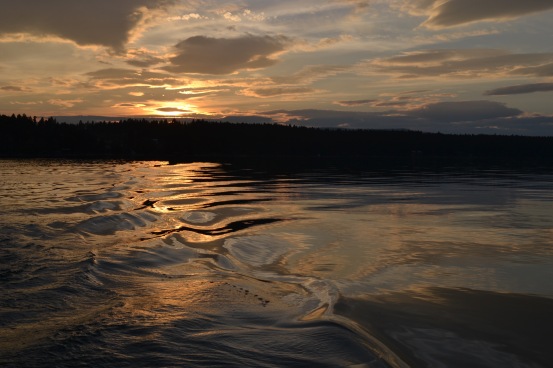 There were certainly a lot of things to do at the lake, but one of the most excellent entertainments that my sister and I devised was to paddle out some ways from the dock, and then to sit down on the paddleboards and let our legs dip in the water up to our knees. I’d rest my oar across her board, she would do the same to mine, so that we could bring our boards parallel to each other and talk face-to-face. The first time we did this, we had such a good time that we didn’t realize that we’d drifted out of the bay and into rougher water where the wind was picking up. It was a trick paddling back to the dock, but we made it and somehow avoided the obvious questions of “Did you mean to go that far?” and “Your sense of distance is really bad, isn’t it?”

We spent the most time at that lake, so it has the best memories for me, but we saw many other lakes before returning to our rather dry, dusty state. My sister-in-law had to return to the grind of the workweek after just a few days, and my granddad parted ways with us a handful of days after that. The remaining four of us ventured on and took in the misty heights of Glacier National Park, slept in a cozy renovated caboose, and enjoyed time together. We moved to Idaho, staying at small house near one of the beautiful lakes, Pend Oreille, a house with a smell that did not manage to ruin the trip, though it tried mightily. After fending it off with a constant boil of honey vanilla chamomile tea on the stove, a warm fire in the wood-burning stove, and towels pressed under the doors closest to the source of the terrifically bad smell, we could be in the house without complaint. We even managed to make s’mores in the stove with the help of some extra-long salad tongs and an oven mitt.

But our tour of lakes didn’t end there. On a cruise of nearby Lake Coeur d’Alene, we marveled at the houses on the shores, and then a few days later, we found ourselves back in Montana, admiring Yellowstone. And though I’d visited the national park twice before, both visits had been in the summer, and as I said before, it’s no bad thing to see a place at a different time of the year. We had excellent weather for the days that we visited, and we were treated to an incredible view of the park on the morning that we started to drive home. In the early, frosty morning, every geyser and hot spring sent up plumes of steam across the landscape. The Yellowstone River, heated by the hot springs that flow into it, was also steaming. With these plumes rising in the background and the river winding beside the road, we passed a herd of over one hundred buffalo grazing on the flatlands. Yellowstone in September—quite a sight.

I can’t say that our trip was purely surreal or glamorous. It involved dozens of hours in the car, a few early morning risings, and some long traffic delays, including one where my sister and I made sandwiches in the back of the car because we’d all be starving if we had waited to have lunch at our destination. Of course, my family’s trips to Yellowstone also always include the complimentary commentary, courtesy of my brother, of the tragic deaths that have occurred in each of the places that we visit. The last time that we visited the park as a family, he had picked up a book that had all the macabre details, and needless to say, I’ve never forgotten it. Now that I’m older, I still don’t care much for hearing about the people that died on the very trail that I’m walking down, but at least I can enjoy the confused looks of our fellow hikers. At one point, as we stood at the brink of the roaring Lower Falls in Yellowstone’s Grand Canyon, my dad and brother discussed how important it would be for an unfortunate swimmer to make it to the shore after having cascaded down the first waterfall before falling over the second, despite perhaps having broken bones. I almost turned to the German couple beside me and explained, “It’s okay. They’re doctors.” Their thoughts are certainly occupied by different things than mine! But it’s part of what makes my family what it is. Weird, perhaps, but always well informed. 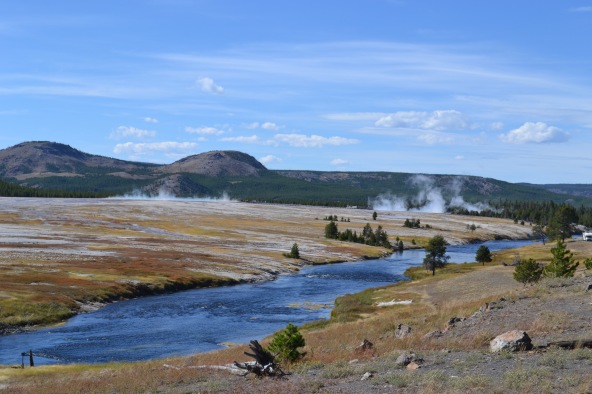 On our way home, we passed the sprawling lake that reflects the Grand Tetons, and I wondered when I’d see water again like that. I wondered at how much my perception of Montana and Idaho had been changed. I wondered at how I could now understand all those signs that said, “Relax. You’re at the lake.” And I wondered when my family would be able to travel together again. I can’t take that for granted. So I’ll laugh at my brother’s jokes, even when they’re not that good, because I enjoy hearing him. I’ll enjoy sitting near the fire reading by my dad, because I know that we won’t always be able to do that. And I won’t mind floating far from shore as long as I can chat with my sister. 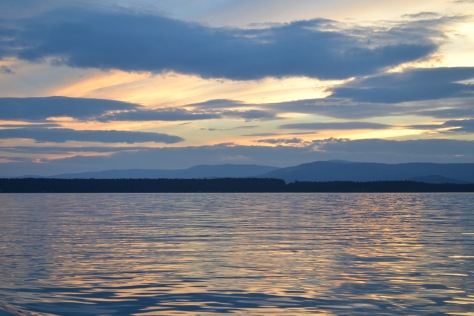 3 thoughts on “A Tour of Lakes–Back from September Travels”